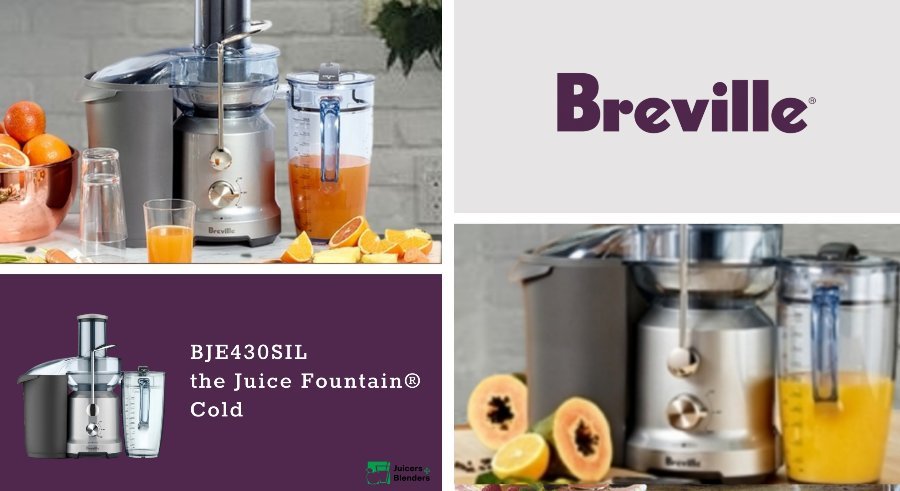 Homemade fruit and vegetable juices are all about acquiring nature’s best vitamins and minerals at their rich source. Ensure that every valuable nutrient in your favorite produce is protected by adding the Breville BJE430SIL to your juicing routine. In this review, you’ll learn all about how this model fuses innovative cold-press technology and reliable centrifugal components to create a top-notch juicer appropriate for all budgets.

I’ve been making my homemade fruit and vegetable juice for a few years now. After each drink of my favorite post-workout beverage, I wondered, “how could my juice get better than this?”

After speaking with a seasoned juicing expert, it turned out that there was still room for improvement in made homemade juice. Specifically, I was missing out on an extra nutritional payload if I wasn’t using a modern cold-press juicer like the Breville BJE430SIL.

After trying out this specific juicer on my own, I immediately tasted the difference. Not only that, but I also felt more energized and less susceptible to illness as a greater volume of natural nutrients made it into my juice glass.

But don’t just take my word for it! Read on to learn about how the Breville BJE430SIL’s numerous productive specifications and features make it a prized appliance in much homemade juice connoisseur’s kitchens.

If you’ve used a Breville juicer before, then you know what to expect from the Breville BJE430SIL when it comes to core capabilities. This model is built from durable materials and features a variety of performance-built juicing mechanisms that outputs the most nutrient-rich juice available to consumers today.

These following ratings should give you a quick insight into my thoughts on the Breville BJE430SIL, including its core performance and output quality:

This is all to say; the Breville BJE430SIL is a productive kitchen appliance that shouldn’t be ignored by anyone who wants to maximize their nutritional intake. Even among Breville’s reliable collection of top juicers, no other model can match this juicer’s ability to produce enriching fruit and vegetable juice in mere minutes without burning a hole in the user’s wallet.

You may think you know and love at-home juicing, but you don’t know the half of it until you try out the Breville BJE430SIL. This model is innovative beyond compare and entirely worth your pick as you shop for your next juicer upgrade.

What is Unique about the Breville BJE430SIL?

One of the Breville BJE430SIL’s most unique qualities is advertised front and center. Because it makes it primarily separates this model from both the competition and its fellow Breville juicers.

To be specific, this model makes use of Breville’s proprietary “Cold Spin” technology to infuse its presently productive extraction method with well-regard cold-press processes. This results in a particularly nutrient-dense final product, which in and of itself is unique in its ability to supercharge the immune systems of those that drink it.

This model’s 70 oz. juice container also stands out as unique, given its immense carrying capacity. Breville even managed to make such a large container useful by allowing the output spout to slot into this juice container’s side Smoothly.

What Type of Juicer is the Breville BJE430SIL?

Those who see the Breville BJE430SIL on a store shelf or an online listing might be quick to question its precise type categorization. After seeing that it includes cold-press capabilities, one might assume that it is entirely a cold-press juicer.

But in fact, the Breville BJE430SIL is better than this underlying assumption because it is categorically a centrifugal juicer with cold-press supplementation. What exactly does that mean?

In essence, the Breville BJE430SIL extracts juice through centrifugal motion while simultaneously cooling the extraction chamber. This is done to prevent friction-based heat from denaturing the numerous vitamins and minerals housed in each piece of produce.

This allows the Breville BJE430SIL to provide all of the efficiency of a basic centrifugal juicer with all of the content-based benefits of a cold-press juicer in one purpose-built package.

What is a Centrifugal Juicer?

By definition, a centrifugal juicer is a specialized type of kitchen appliance. It uses a combination of sharp slicing mechanisms, filters, and high rotational speeds to extract a productive volume of juice from fresh produce. Most centrifugal juicers are built with flexible use in mind, allowing them to extract juice from both hard and soft produce.

What are the Benefits of a Centrifugal Juicer?

Centrifugal juicers provide at-home juice makers with a bevy of benefits that have allowed them to remain a favorite among both novices and seasoned veterans. For example, no other juicer type can match centrifugal units for their operational speeds.

With blade speeds at 10,000 RPMs or higher on average, most well-built models like the Breville BJE430SIL can make quick work of produce of varying densities. Many would-be juice makers also flock to centrifugal models due to their routinely affordable price tags.

Due to ongoing competition in this categorical market, even high-end models from brands like Breville are priced to move from store shelves to consumer kitchens. This affordability doesn’t imply cheapness, though, as most centrifugal juicers remain durable and productive throughout their 5+ year average lifespan.

More often than not, centrifugal juicers are compared to masticating low-speed juicer machines. Though they fall into the same “juicer” taxonomy, these two juicer types could not be more different when it comes to their respective core operations.

For example, a centrifugal juicer like the Breville BJE430SIL uses powerful motors and sharp disc blades to draw out fruits and vegetables. The masticating juicers use a chewing-like motion to slowly extract a larger volume of juice per piece of produce.

These two juicer types are also generally differentiated based upon the amount of sound they produce while in operation. Masticating juicers are prized in this domain because they run nearly silently.

Some see this as a significant improvement from the centrifugal juicers, which are known to run rather loudly due to their reliance on metallic components and rotational friction. Finally, centrifugal and masticating juicers are separated in terms of the average price.

Some folks look for a bonus load of vitamins when they’re feeling under the weather. Others look for a daily dose of minerals to support their healthy lifestyle. In either case, the Breville BJE430SIL makes it easy and affordable to enjoy a nutrient-rich drink without needing to shell out cash at a juice bar.

I’ve made my Breville BJE430SIL a part of my daily routine, and I haven’t regretted it once. Now, I know what you’re thinking, and I’ve heard it a few times. Yes, centrifugal juicers are not the absolute best pick for those looking to juice leafy greens or wheatgrass.

But as a tradeoff, no other juicer type can crush up and extract juice from extra dense produce like beets and carrots without overworking the motor. Also, a centrifugal juicer like the Breville BJE430SIL far outranks its competition when it comes to locking in nutrients through its propriety cold-press technology. All of the Breville BJE430SIL’s other specifications are outstanding as well.

For example, this model’s two-speed settings at 1,300 RPMs and 6,500 RPMs provide a great deal of flexibility when it comes to making a juicy mixture of fruits and vegetables. You won’t be forced to stop and empty this model’s pulp container often either given its 3.4-liter volume.

Typically, I follow Breville’s recommendations for cleaning my juicer. Among other maintenance steps, this includes cleaning all parts that come into contact with the juice or pulp with warm, soapy water after each use. This consists of the mesh filter, which should be soaked for 10 minutes before brushing clean. All components should also be air-dried afterward. Alternatively, many Breville BJE430SIL can be washed in a dishwasher. For more tips about maintaining your new Breville BJE430SIL, you should also check out Breville’s digital resources.

In terms of per-dollar value, the Breville BJE430SIL certainly punches above its weight class. At around $180, one might expect this appliance only to perform the basics. But this model’s inclusion of proprietary “Cold Spin” technology pays dividends when it comes to producing a reliable volume of nutrient-dense juice.

Also, the Breville BJE430SIL’s numerous durable extraction components won’t corrode after a few uses. So you can count on it for five or more years after purchasing it.

What Are Others Saying?

Negatives.  One of the most persistent complaints about the Breville BJE430SIL is that it produces a pulp that is too wet. And thus, an indicator that it isn’t extracting a maximum volume of juice from inserted produce. Also, some users have indicated that this model’s mesh filter begins to allow more debris into the final juice produce as it begins to wear down.

Alternatives to the Breville BJE430SIL

How does the Breville BJE430SIL compare to other juicers on the market today? Take a look and see for yourself:

In terms of physical resemblance, the Breville BJE430SIL and the Breville 800JEXL share a near-identical similarity. However, under the hood, these two capable juicers differ in a couple of essential categories. For example, the 800JEXL’s low-speed setting is as fast as the BJE430SIL’s high-speed setting (6,500 RPMs). That being said, the 800JEXL’s pulp container is about 2 ounces smaller than the large container seen on the BJE430SIL.

The Breville BJE430SIL and Breville BJE200XL both derive from the same product line, so they share some significant similarities, such as the use of stainless steel extraction components. However, the BJE200XL features a far more compact form factor than the BJE430SIL. As a tradeoff, the BJE200XL only includes a one-speed setting compared to the BJE430SIL “high” and “low” speed options.

Here again, the Breville BJE430SIL and Breville JE98XL appear at first to be almost identical, with their similar physical appearance and use of an 850-watt motor. Both models even include two-speed settings. However, the BJE430SIL still stands out as a slightly better value due to its inclusion of “Cold Spin” technology for a small added price.

Conclusion – Is BJE430SIL Juicer for You?

What’s more, it’s the inclusion of Breville’s innovative “Cold Spin” technology that allows it to hold onto more vitamins and minerals in flavorful homemade juice. You’re missing out if you choose to ignore the Breville BJE430SIL.

Don’t miss out on the best cup of fruit and vegetable juice you’ve ever had! Buy the Breville BJE430SIL and try its fully-fledged juicing capabilities out for yourself! 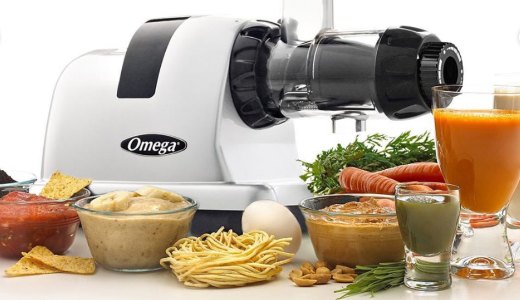 Omega Juicers: Which is the Best Juicer Model for You? 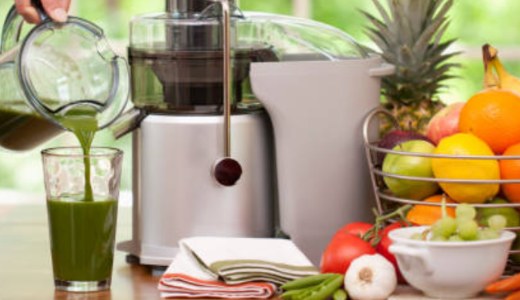 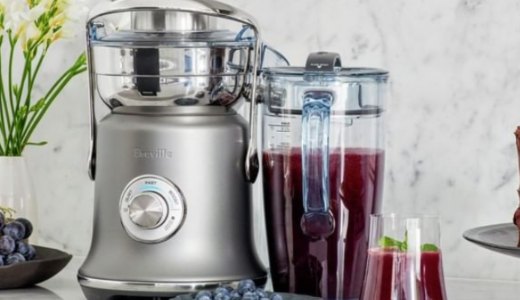 Which is Breville is Right Juicer for You? 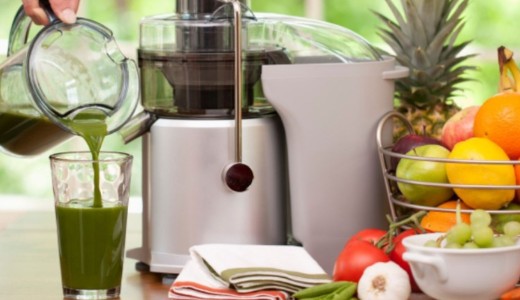 Things to Consider Before Choosing a Juicer Machine